The rise of the commuter town during the COVID-19 pandemic

COVID-19 changed everything. Socialising, eating out, meeting friends or family – it all disappeared. Instead, we filled our time with socially distanced walks, takeaways, banana bread and Zoom quizzes. But perhaps the biggest thing it changed for many of us was our working routines.

Instead of getting up, tapping a card on a bus, tram, tube or train as we sip our morning coffee, we slept in and worked from home.

For those of us who lived in a city, this opened up possibilities. As we no longer had to be near work to do work, could we save money by moving to the suburbs? Could commuter towns become our new homes?

To find out if the pandemic impacted cities, we analysed which commuter towns have prospered the most from the pandemic, taking into account property prices, property sales, job vacancies, average salaries and footfall data for the past year.

We looked at each of these data points, comparing them from January of 2020 to March 2021 to discover where there was growth over the pandemic period.

Each data source was scored equally, which allowed us to compare indexes from January 2020 to March 2021 and discover the percentage increase in growth for towns and cities across the UK.

Exeter is the commuter city with the greatest lockdown growth

Given its university status, Exeter was a typically transient city, with people moving in and out regularly. It's not uncommon for the city's graduates to take up jobs over the River Exe, in Devon or Torquay.

That all changed during COVID-19, however, with the city seeing a 17.94% growth over lockdown, more than anywhere else. Job prospects in the region boomed, going from 1,245 vacancies pre-pandemic to 3,278, with a healthy average salary of £36,199.

In 2019 Exeter was dubbed one of the UK’s fastest-growing economies, seeing year-on-year GVA growth of 1.6 percent in Q2 making 7th place overall. This has seemingly continued over the pandemic period with the city growing more than any other commuter town.

It's no secret London's rent prices are costly. It's not easy to get much bang for your buck in the UK's capital city. So when the pandemic hit and remote working became the new norm, it's no surprise that there was an exodus from the inner cities.

With none of the perks of cosmopolitan living, city-dwellers may have swapped the rat race for a slower pace of live – finding tranquillity in green or coastal towns.

Eastbourne is an 86 minute train journey from the centre of the capital. Its affordable housing and tranquil seaside setting helped it grow 15.88% during the last 12 months. This growth increased average house prices from £242,000 to £261,000.

Worthing is another town on the capital’s outskirts that saw city workers take up its cheaper cost of living. It saw a 4.26% growth throughout 2020, making it the third most successful commuter town in our report. The town saw a comfortable increase in its average salary from £32,274 to £35,852 and property sales increased from 140 from January 2020 to 174 in November 2020.

Some commuter towns were unaffected by the impacts of the pandemic. In fact, their growth actually slowed with workers staying in neighbouring cities or staying away altogether.

Bridgend in Wales saw the biggest decline. The town is halfway between Swansea and Cardiff, but despite its prominent position saw a 34.56% decline in growth compared to the previous year due partially to slower property sales.

Luton also struggled. This popular London commuter town saw a 29.51% drop in growth, as the lockdown restrictions put a halt to its usual worker influx. Footfall to workplaces and transport stations dipped significantly more than other towns on the list.

Salford is one of the biggest areas in our report with a population of 258,834. However, even this thriving Manchester hub saw its growth slowed – a 28.49% decrease despite it being a media hotspot. Property sales decreased from 284 in the month of January 2020, to 280 in November 2020. 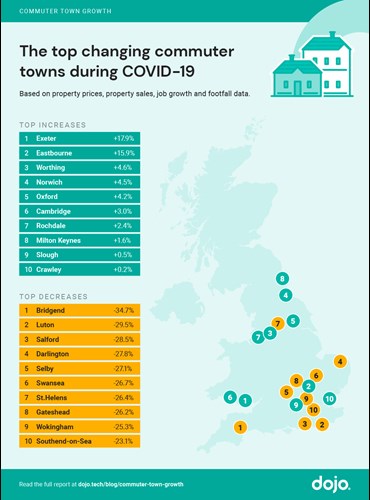 Living in a big city can have real advantages when it comes to working and socialising. But with all of that confined to your own four walls, many chose to leave the cities behind.

Bradford saw the biggest hit, with a decrease of 24.25% overall, with property sales moving at a much slower rate than any of the other UK cities as well as a decrease in footfall over the pandemic period. Although vacancies increased in the city, footfall had dipped and not recovered as quickly as other places.

Newcastle upon Tyne took the second spot. With its metropolitan shopping centres and business hubs all shut down, the city declined in growth by 17.23% as working from home became the new normal and footfall across the city dipped with many of its residents no longer needing to commute.

Completing our top three is Coventry. On the border of Birmingham, the city is normally a thriving mass of workers every morning. The city’s property market shrank by 15.72%, with property sales dipping from 329 in January 2020 to 293 in November 2020.

The UK cities that fluctuated the most 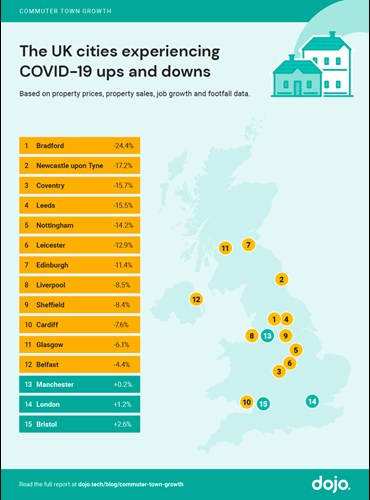 How London boroughs changed in COVID-19

London’s outer boroughs can often provide more affordable housing than the central regions of the city, something that definitely helped Havering secure lockdown growth. With an average house price of £387,743, it’s drastically cheaper than London’s average of £501,000. This perhaps contributed to its growth of 4.74% during the pandemic.

The London borough of Hackney, however, didn’t see growth like some of the other places on our list. The trendy East London area saw a 45.66% decrease. The borough was hit hard by a large decrease in footfall – perhaps as it's an area known for its great nightlight, bars and hospitality scene.

Just behind is Westminster - the political centre of the country, seeing a 44.35% decrease in growth. Property prices actually dipped from just under the £1million mark to £956,658 from January 2020 to January 2021. And property sales also dropped from 188 to 123.

The government has plans to revitalise the area with an ambitious scheme to revive Oxford Street and the wider district into a must-visit area and support more local businesses.

A time of renewal and growth

Despite fluctuations and instability, the coronavirus pandemic has brought growth to new businesses and has helped consumers appreciate the value of independent businesses. In fact, Companies House data found that in the third quarter of 2020 there were more businesses registered than in the past three years – with 221,020 new companies being created.

Now lockdown is easing, businesses could be set to boom from customers determined to make the most of rediscovered freedoms.

If you're a small business owner ready to make the most of the month ahead, our contactless card machines accept card payments safely and efficiently. And we're helping protect your cash flow, so you'll receive your takings into your business bank account from 10am the next working day.

In order to discover which commuter towns in the UK have grown over the pandemic period we looked at property prices, average salary, property sales, job vacancies and transit station, workplace and residential movements on Google Maps to determine a definitive growth figure. Regions and districts were removed from the final list. The data was taken between January 2020 and March 2021. We compared data from 2020 to data from 2021 to find the final growth figure.