The purpose of this report

We see this gender pay gap report as an opportunity to detail the facts, to hold ourselves accountable and to set plans to help us build a more diverse and equitable future.

This is our second gender pay gap report. We published our first in October 2021 which gave us base numbers to work from, and it was immediately clear that we had work to do. Our April 2022 results were calculated using a snapshot date of April 2021. Between April 2020 and 2021 our headcount grew by 180 (46%), and with a large part of this growth being in our Technology, Commercial, Operations and People teams, we were able to predict the widening pay gap which we see in this report.

Here’s what we did

Since October 2021 we’ve focussed on making meaningful and sustainable improvements at Dojo, which we hope will start to reduce our gender pay gap and take effect over the coming months and years. You can read more about that in the ‘What we’re already doing’ section below.

This report details the facts and our actions.

What is the gender pay gap?

The gender pay gap shows the difference in average hourly earnings between men and women working in our organisation at a point in time (regardless of job role, seniority or location).

The gender pay gap is different from equal pay.​ The 1970 Equal Pay Act made it illegal to pay people doing the same job differently based on gender.

(The gender definitions “men” and “women” we use are based on the current legal definitions. As a business, however, we recognise that not everyone’s gender identity fits into this binary approach.) 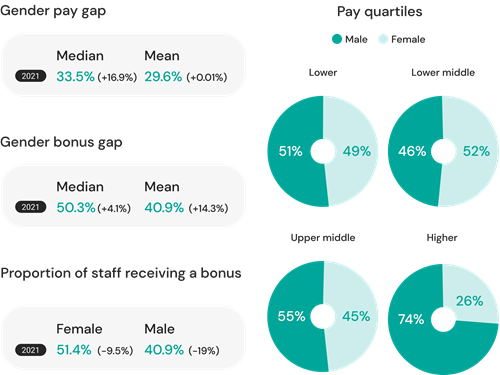 Data behind the pay gap

In April 2021 the gender split at Dojo was made up of 43% women and 57% men. Some of our larger departments had a greater representation of men than women:

While the representation of women in our Technology/Engineering department is in line with the UK national average (14%, Engineering UK, June 2021), we’re still focused on doing as much as we can to increase that as outlined in our action plan below.

Representation in our top pay quartile

We can see that our pay gap is heavily influenced by the makeup of our top pay quartile.

As of the snapshot date (April 2021) the top pay quartile was made up of 143 employees with 74% of them being men. The representation of women in this quartile has declined by 7% since our last report.

67% of the roles in our top pay quartile were from our Technology/ Engineering, Commercial, Data or Product teams (which have generally higher paid roles).

We saw a fairly even gender balance across the other three pay quartiles compared to the last report:

The gender pay gap widened between 2020 and 2021. During this period we hired more men (104) than women (76) and the majority of those men went into more highly paid roles within Tech, Commercial, Product and Data. This result means that we have seen our median hourly pay rate increase more for men. The change can be seen below.

There’s no formal bonus structure for the majority of Dojo employees. However, certain roles within two departments are eligible.

These roles yield higher bonus payments (when compared to Operations roles on average), with 65% of those eligible being men. These roles are mostly field-based with a few in London.

These bonuses are smaller (when compared to sales commissions on average). The eligible roles are based mostly in Bristol and Hull, with 60% of the recipients being women.

What we’re already doing for diversity

Dojo Communities - we actively promote our communities, which are all designed to make everyone here feel included. Communities act as the voice of employees, suggesting ideas and helping  contribute to what we can be doing more of or better. These communities include Payment Sisters, D&I Working Group, CARE (Commitment & Advocacy for Racial Equality) and many more.

Diversity Data - we’ve started to generate our own MI dashboard for diversity data. We’ll use this data to find and tackle problem areas, to inform our diversity working group’s plans and to generally help us keep sight of diversity at Dojo.

What we want to do next

We’ve identified the following key strategic drivers to help close our gender pay gap. These are designed to encourage representation of women across Dojo with an extra focus on our Commercial, Tech/Engineering and Senior Leadership teams.

Our commitment to closing the gender pay gap feeds into our wider aim to look at diversity in all its forms.

We’re working on fostering diversity, equity and inclusion across Dojo to help build community, cohesion, and a sense of belonging around our shared values. While providing an inclusive workplace where everyone feels valued and respected, and knowingly recruited for their differences.

At Dojo, we want to make this a great place to work for everybody. So to be honest, we’re really not happy with our gender pay gap and we’ve still got lots to work on.

One thing’s clear though – we are committed to making positive change and becoming a great place to work for everyone.

‘This statement confirms that the published information is accurate as at the time of publishing and is signed by Scott Baker, Director of Total Reward’.