Tourism brings great financial benefits to cities and countries around the world with some destinations relying heavily on incoming visitors to keep their economy strong. Whether you’re a sightseer, foodie or adrenaline junkie you’ll most likely be paying for meals, trips and services as part of your adventure, and for most places tipping is a strong indicator to show your appreciation. If you’re in the UK, we can help make tipping easier for small businesses with our card machines, or if you’re travelling further afield tipping might require a bit more thought to pay for your goods.

The expected tipping amount varies considerably between countries, so we’ve compiled a guide on the average tip in the most popular tourist destinations. To bring this guide together, we looked at the suggested tipping rate for restaurants, taxis, tour guides and household staff. Of course, you can tip as much as you want if the service was exceptional and you’re feeling generous, but these are a general guide.

How much should you tip restaurants around the world?

When dining out, tipping is not always required - but it’s often expected, especially if the service and food was good. A service charge is sometimes added, most likely when dining out in a large group, so look out for this on the check before deciding how much to tip.

Tipping etiquette in restaurants varies greatly from country to country - for example, it’s much more common in the US than in the UK, mainly because of pay rates for the wait staff. But how much exactly should you tip in the most tourist-heavy countries? The Dojo Gratuity Guide is here to help guide you on your next trip. 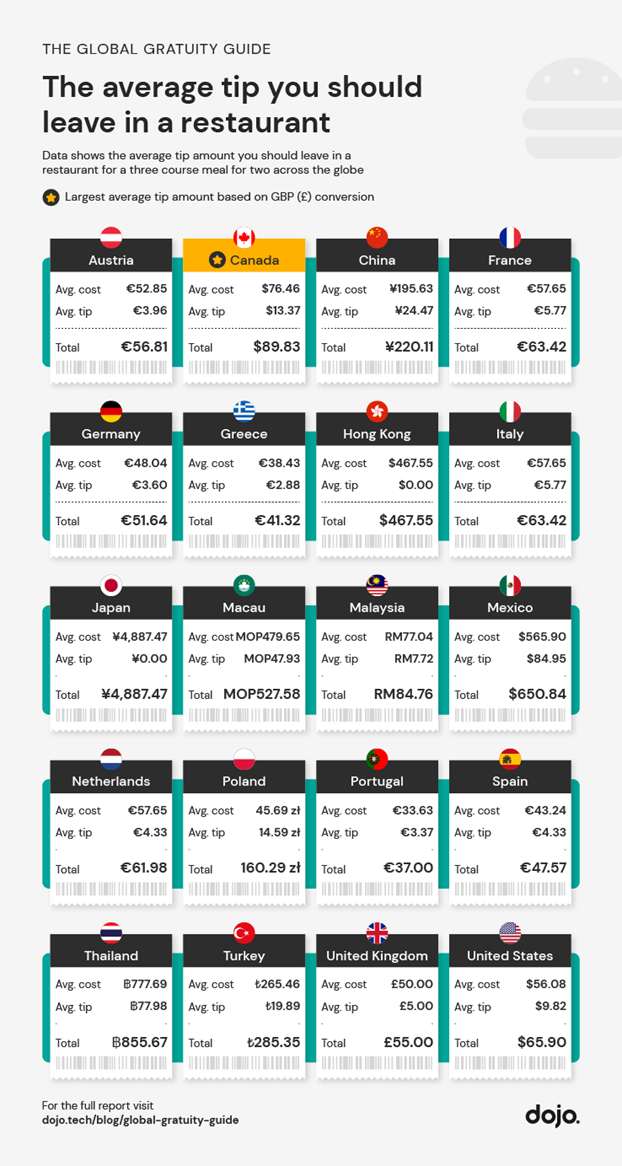 You should tip the same amount in France, Spain and Italy

Tipping in the United States is high at 17.5%

The average suggested amount you should tip in a restaurant

How much should you tip taxi drivers around the world?

In some countries, you’re expected to tip in almost all transactional situations - including in taxis. In these situations, you can tip using cash, via the driver’s card machine, or with common apps such as Uber once the ride is finished. This is how much you should tip in some of the most popular tourist countries. 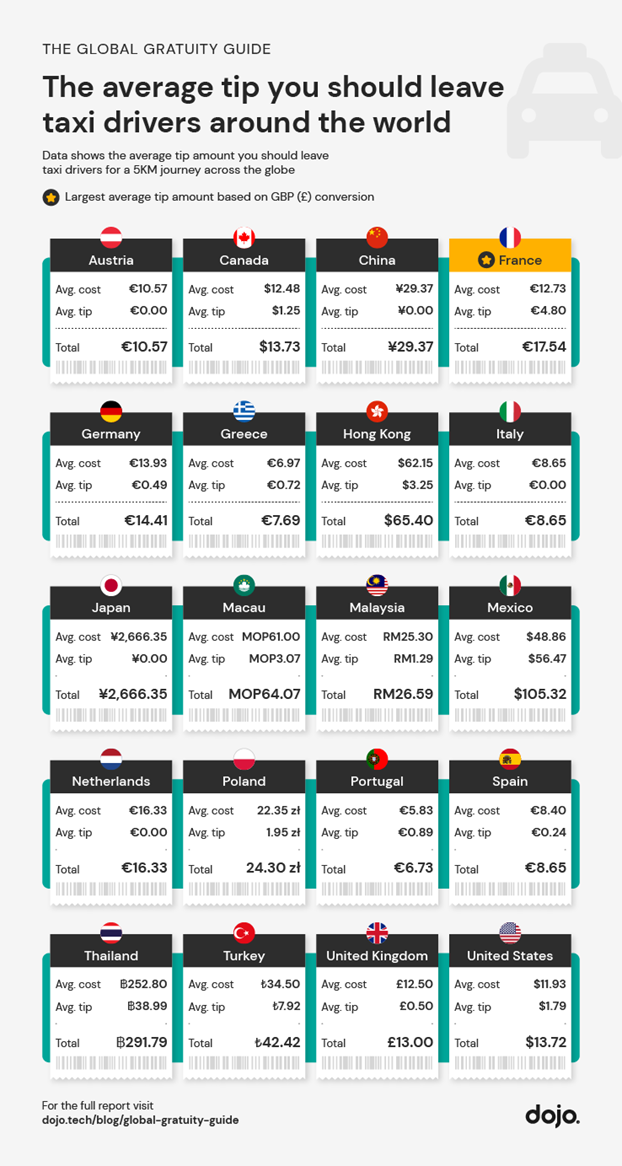 You should round the fare up in Turkey

You should tip a set amount to taxis in Mexico

For taxis in Mexico, the average tip for drivers is around £2.30 ($56.47). The average cost for a 5km ride in its capital, Mexico City, is only £1.99, so adding this tip on will give the driver an extra something while still keeping the cost for you extremely low: win, win.

Taxis in Germany, Thailand and the United Kingdom don’t expect a large tip

Just like in Turkey, taxis in Germany, Thailand and the UK simply expect you to round up the fare. In Thailand, the average cost of a taxi in the capital, Bangkok, is low at just £5.90 (฿252.80). As a result, rounding up won’t break the bank. In Germany and the UK, the average cost is slightly higher at £12.03 (€13.93) and £12.50 respectively, so it’s not the cheapest. However, since you are only expected to round up rather than leave a set amount as a tip, it’s worth showing your appreciation to the driver.

The average suggested amount you should tip taxis

How much should you tip tour guides around the world?

If you’ve been on a great tour in the city you’re visiting, tipping the tour guide is good etiquette. While you may want to tip more depending on the length of the tour (the difference between an hour and day-long tour is significant), there’s a general amount that you should consider tipping in the most popular countries for tourists. 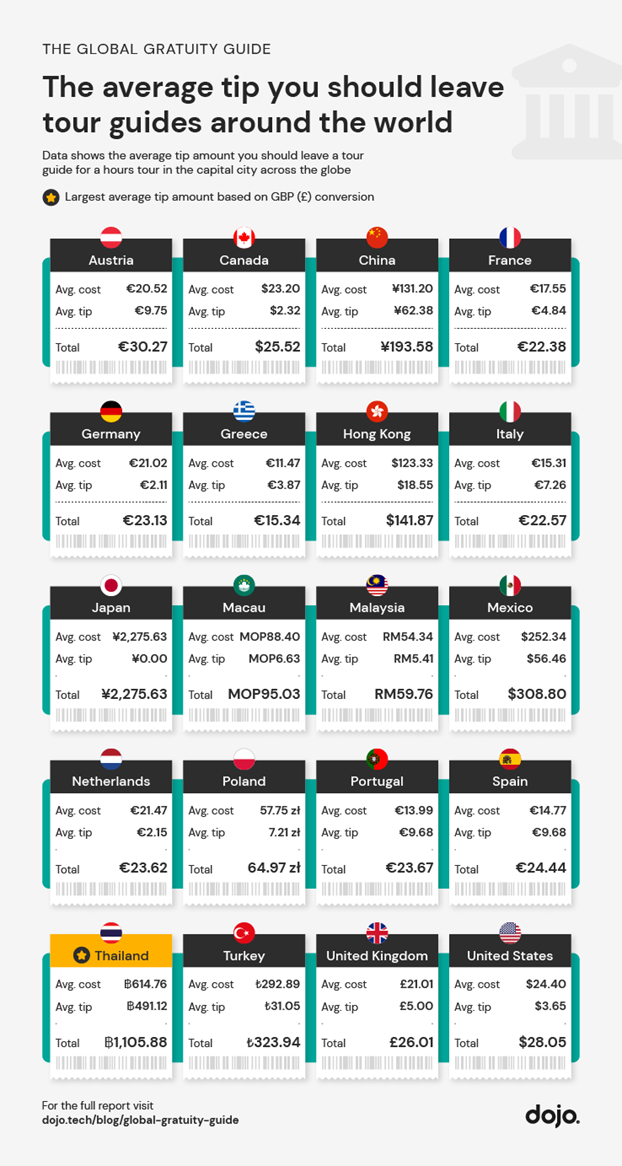 Tipping tour guides is not expected in Japan

In Japan’s capital, Tokyo, the average price of a tour guide per hour is £13.70. This could easily add up, especially if you have a day-long tour booked in, but tipping isn’t expected here, so what you see is what you get when it comes to price.

With 30.8 million tourists a year to the country, Austrian tour guides charge an average of £17.73 an hour in Vienna. When it comes to tipping, however, it’s expected to leave around €9.75 (£8.42) in addition to the cost of your tour.

In Athens, the Greek capital, tour guides cost an average of £9.91 an hour. It’s a good rate considering all the history hidden in the city, and the expected tip is fairly low at €3.87 (£3.34). This means you can learn lots about your surroundings, while also keeping costs fairly low so you have more to spend on other activities in your trip.

You should tip tour guides 15% in Hong Kong

The average tip for tour guides in Malaysia is 10%

Tour guides in the Malaysian capital of Kuala Lumpur charge an average of £10.14 (RM54.34) an hour, leaving them with a fairly affordable rate. When booking, though, always remember the tip. In Malaysia, the general rule with tour guide tipping is to add on 10% of the cost of the tour.

The average suggested amount you should tip tour guides

How much should you tip household staff?

If your trip includes staying in a hotel or accommodation with a cleaning service, you might want to consider tipping them in various countries. Additionally, staff who help you take luggage to your room or go out of their way to make you feel comfortable can be tipped too - but how much? 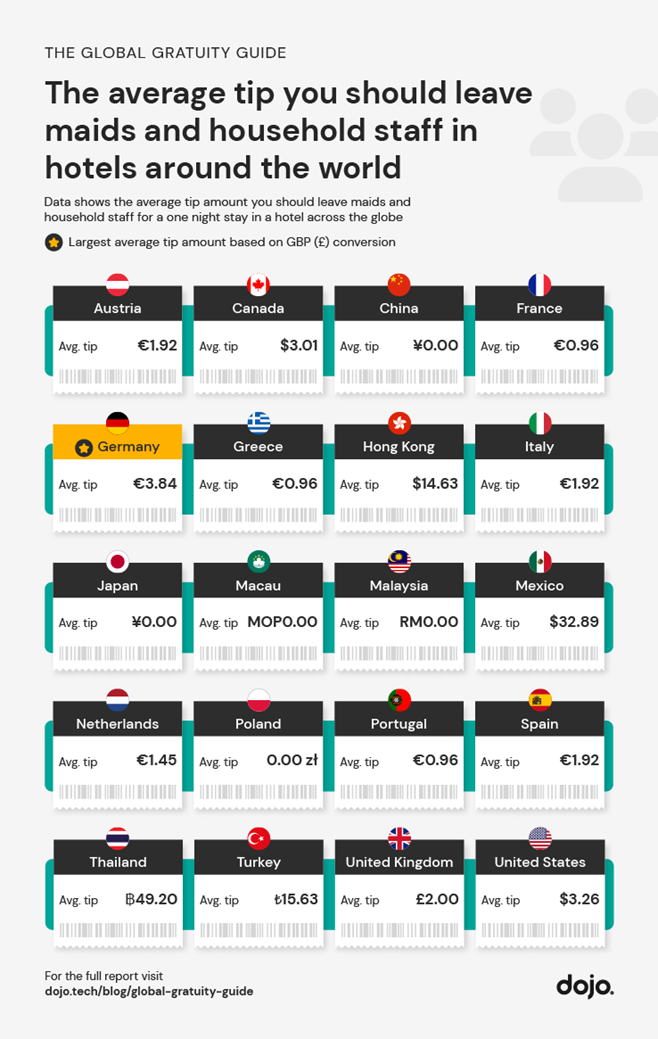 In Portugal, it’s common to tip the household staff €0.96 (83p) per day you’ve stayed at the accommodation. It’s not much to you, but can really show your appreciation to the people who have made your stay comfortable, so it’s well worth the spend.

The general expectation in Canada when it comes to tipping household staff is $3.01 (£1.92) a day. This could add up if you’re staying for a long time in your accommodation, but it’s still worth the spend to thank the staff who have helped make your stay as good as possible.

It’s expected to tip €1.45 a day to household staff in the Netherlands

If you’re planning a trip to the Netherlands, expect to add around €1.45 a night to your accommodation costs for the tip. The equivalent of £1.25, it won’t break the bank, but it is a nice nod of appreciation to the staff.

For any trips to Poland or Macau, both tourist hotspots with just under 20 million visitors a year each, you’re not expected to tip household staff in the accommodation you’re staying in. However, if the service has been especially good and you want to show your appreciation, feel free to leave a little something to give back to the staff who looked after you.

The average suggested amount you should tip maids and household staff

How to tip with card payments

Nowadays, many businesses have transitioned from taking cash to only accepting card payments, but this doesn’t mean it should be more difficult for customers to tip. Many card machines will have the option to add a tip built-in, making it very simple for anyone to add a given amount onto their payment. If you’ve taken a trip to the UK, our Dojo card machines make taking payments - and tips - easier than ever for a wide range of business types.

The cities with the most dog friendly businesses around the world