COVID-19 and the decline of the UK's ATMs

The UK was witnessing a decrease in the number of cash machines on its streets long before the coronavirus. But the virus’ restrictions on lifestyle and its impact on consumer habits have undoubtedly hastened ATMs' decline.

With more and more businesses using card machines to accept contactless payments, we wanted to understand just how severe the impact of COVID-19 has been on the decline of cash usage.

We’ve analysed data on ATM closures across the UK over 2019 to 2020 – the point at which the pandemic shook up our daily routines, unexpectedly.

For most of us, this may seem like the continuation of a logical move away from traditional cash transactions to a fully digital economy.

The UK Treasury, however, fears that this may negatively affect older and low-income consumers, and is determined to stop the UK “sleepwalking” into becoming a fully cashless society.

It’s important that vulnerable members of our society have access to cash or suitable financial services, so there’s a lot to consider before we completely oust cash for good.

But some UK cities are accelerating to cash-free high streets far quicker than others.

We’ve ranked the UK cities with the highest declines in ATMs below. 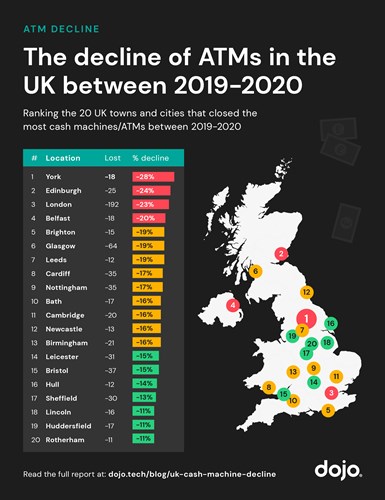 York loses a third of its ATMs in just one year

While London ranks third, the largest city in the country lost a phenomenal 192 machines between January 2019 and September 2020 – a 23% decline.

In a city with a population of almost 9.5 million people, there are now only 638 cash machines in the whole of the city. That means that one cash machine would need to serve 14,583 people.

ATM numbers are increasing in Halifax

Halifax is bucking national trends by increasing the number of cash machines on its high streets in 2020.

The reason the town, the namesake for one of the UK’s largest banking brands, boasts the greatest increase in the number of ATM’s is unclear. It may be related to the population groups most reliant upon ATM technology.

While the percentage of the population of the over 65 in the region is below the 18% national average, at 16.2%, areas of the region are notable for their general levels of low incomes, which may shed some light on the upwards trend.

Sheffield has the fewest ATMs per capita

Despite a population of over 730,000, making it the fourth-largest city in the country, Sheffield is the place in the UK with the least amount of cash machines per capita.

The Steel City's high streets have just 186 cash machines, meaning that there is only one ATM in the South Yorkshire municipality, for approximately every 3925 residents.

Free to use ATMs are declining at a faster rate

The decline of cash usage makes ATMs a less financially viable proposition for those who supply them.

This has seen the number of free to use ATMs decrease at a higher rate of decline than their counterparts, which require a surcharge for consumers to receive their cash.

While this may not be an issue for some consumers, it does negatively affect those vulnerable groups who mostly rely on the machines in the first place.

Though this something that is not being ignored with the UK treasury. They've declared their intention to protect access to cash for everyone who needs it.

One way of achieving this is by encouraging shops and business to offer cashback, without consumers needing to make a purchase.

"During the course of the coronavirus pandemic, the makeup of the great British high street has changed enormously.

While it’s long been evolving in the face of the rising of the digital marketplace, coronavirus has reaffirmed the dominance of financial technologies.

As we’ve seen already in the press, the contactless limit could increase once again from £45 to £100, allowing people more convenience to tap for their in-store purchases.

With more and more people opting for Apple and Google Pay which has no capped limit for contactless payments, consumers are welcoming the efficiency and speed at which they can purchase larger value products and services.

It is no surprise then, in our digitised economy, that the use of cash is decreasing, making ATMs redundant."

We examined the decline in ATM machines (both free and those with a surcharge) across regions of the UK, over a 21 month period between Jan 2019 and Sep 2020. The rate of decline was then calculated by looking at the percentage change within this period. Our findings were then considered in relation to population size and the number of ATMs when divided by the population (in 1000's). The same methodology was used for specific demographics, such as the over 60's, as well as the number of the surcharge and free ATM per 1000 people.