Rise and grind: The daily habits of female entrepreneurs

If there’s one thing that 2020 and the coronavirus pandemic brought into the spotlight, it was our daily routines – or, the demise of them, at least.

It’s only as we said goodbye to our early morning rituals – a black americano after our sweaty hot yoga; or our cheeky bacon roll before we rush into the office, that we truly realised how much we needed them. Not just for our sanity, but for our productivity too.

Sure, it was nice having an extra lie-in, not being pressed against a stranger on the Victoria line or paying over the odds for city-centre parking. But when it comes to that feeling of getting up and seizing the day, rolling out of bed and straight onto a Zoom call, it doesn’t have the same, je ne sais quoi, does it?

With our favourite recreational activities closed, we were forced to create new routines to help us through often solitary lockdowns. Some of us took up new hobbies that we turned into successful side-hustles, and some of us set new Strava PBs. Whatever we did, it was more often a shift from the norm that we may have not even ventured into beforehand.

So, this got the Dojo team thinking. How do our routines shape us, and how do they contribute to our success or feelings of accomplishment?

We wanted to know if there was a secret formula that we could tap into for inspiration, so we looked at some of the most successful female entrepreneurs across the globe to find out.

We analysed the 24-hour routines of 26 female business owners, CEOs or founders that were renowned for their success globally. Here’s what we found… 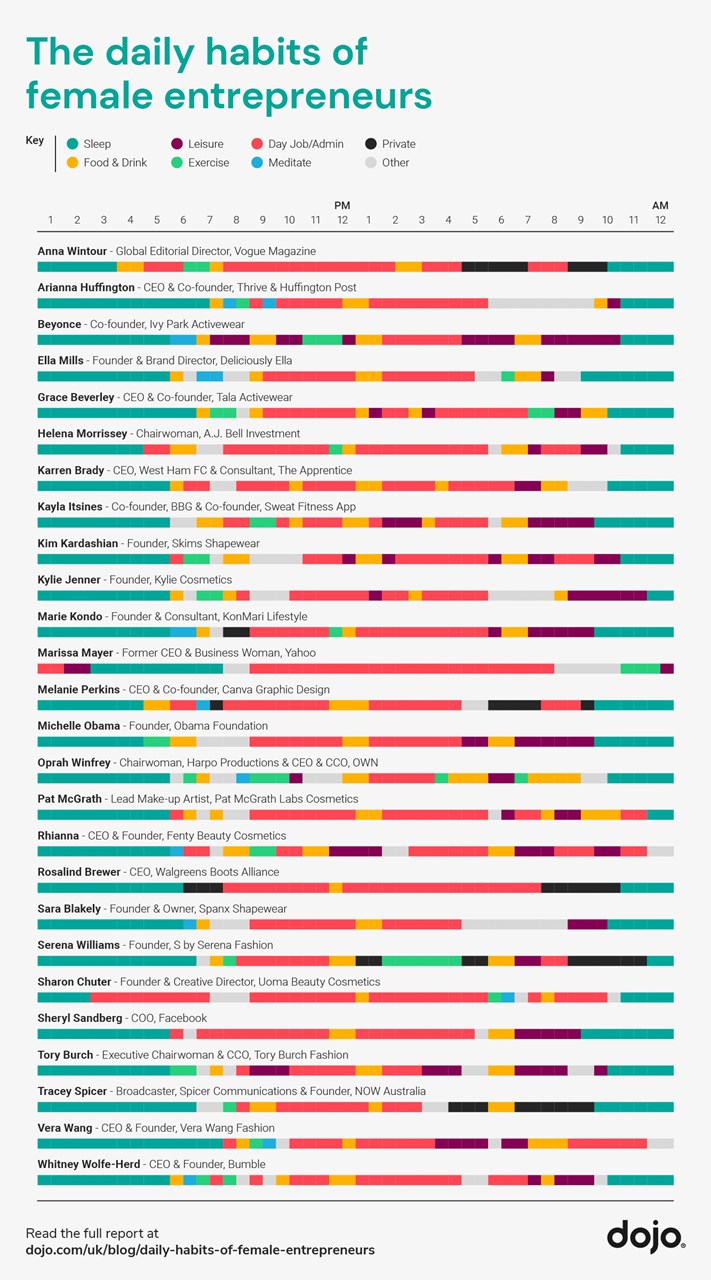 It’s hard to knock the benefits of a good night’s sleep, but oversleeping can be fatal, leaving us feeling sluggish and slow. Most business owners on our list rise well before 8am, with most getting only 5-6 hours sleep. It doesn’t seem to stop them from cramming their day full, though. Could the magic eight hours be a fallacy, then? These iconic entrepreneurs seem to squeeze out more from less.

Vogue’s very own ice-queen and cult fashion icon Anna Wintour has a hard start at 4am, and even she isn’t the earliest of our risers. For her, the nighttime is for getting work delivered, and the morning is for catching up with relevant British and U.S. news.

Sharon Chuter, the founder and CEO of Uoma Beauty, the most inclusive black-owned business brand, sleeps from 10pm to 2am before getting down to business – four hours less than our recommended amount of sleep.

Marissa Mayer, former CEO of Yahoo and co-founder of Sunshine Contact, prefers to exercise during the twilight hours, saving her rest until 3am to 8am.

Meanwhile, music mogul and beauty business owner Rihanna also opts for a late night and early start sleeping from 1am to 6am but makes up for fatigue with power naps throughout the day if needed.

Founder of the highly successful dating app Bumble, which champions women who make the first move, Whitney Wolfe Herd sleeps until around 6am but usually follows the circadian rhythm. She commented, “I sleep with the drapes open to rise with the sun. I think that’s a healthy thing to do because even if you don’t like to wake up early, your body does adjust.”

And finally, chat hostess with the mostess, Oprah Winfrey also opts for a natural approach saying she ‘doesn’t believe in alarms’ – she simply manifests the time she wants to wake up before she goes to sleep. We’re not sure this one is foolproof, but it sounds pretty fun.

Rumour has it that Steve Jobs, Mark Zuckerberg, and even Albert Einstein all wore the same outfit every day to minimise decision fatigue and, in the instance of Steve Jobs, establish their individual brand with a recognisable uniform.

This ritual isn’t exclusive to successful men – Anna Wintour is also known for stepping out in similar outfits every day for the same reason. The fewer decisions she needs to make on the spot, the less wasted time. It’s safe to say that the outfit she steps out in is impeccable – if it’s not broken, don’t fix it?

Decision fatigue doesn’t just occur with outfits, though. Preparedness across the board can help reduce the time it takes to make impromptu decisions for minor things. Think about the time you’ve spent going back and forth through an extensive restaurant menu before you finally make up your mind? Well, imagine that feeling throughout the whole day.

Most of the entrepreneurs we analysed say that having a strict routine works purely because of its repetitiveness. While this may seem banal or tedious, it takes away unnecessary distractions from their creative work.

Kim Kardashian, a household name that needs no introduction, plans things out rigorously, even her workout clothes the night before. Her meals are all prepped for each day to maintain a level of structure.

Grace Beverley, the 24 CEO of Shreddy, a fitness and health app and Tala, a sustainable activewear business, finds it essential to schedule her rest. While Serena Williams goes as far as segmenting her days, keeping them for one specific thing – Mondays are her ‘think days’, whereas Wednesdays are strictly for meetings.

It seems like the more things are prepared well in advance and less on the day itself, the more productive or in rhythm these pioneering women find themselves.

Exercise is crucial for the body and the mind

Despite having a full day of work, and functioning on less than eight hours of sleep, all of the women on our list manage to find some time in their day to exercise their bodies and focus on their minds.

Beyoncé Knowles, also known by fans as ‘queen B’, is among the most influential celebrity figures that work out during the first half of the day, although she admits to dancing for up to nine hours per day.

Along with Marie Kondo, Rosalind Brewer and Rhianna, Beyoncé, whose net worth is currently at half a billion, takes time out every morning to meditate and ‘give gratitudes’.

Why meditation? It may be hard to imagine women with so much going on sitting still but, according to experts, taking time to pause and reflect pays dividends.

In fact, it’s believed that meditation can help improve memory and helps people stay focussed, away from distractions that suck away vital time from the things that matter.

Karren Brady CBE, the current vice-chairman of West Ham and aide to Lord Alan Sugar, likes to exercise her brain early in the morning with a sudoku puzzle. She spends time on wellness and relaxation during the evenings with a “long bath to clear her head”.

There’s no disputing that all the women on this list are incredibly busy. Not only are they all exceptionally noteworthy and influential in their industries, but a lot of them are mothers too. So one of the most exciting things we found was how they juggle their work-home balance.

Rather than working flat out for eight hours at a time, most of these influential entrepreneurs split their work between other activities such as exercise, meditation, social/family time – something incredibly important for Kim Kardashian and Kylie Jenner.

It’s nice to see that Beyonce and Michelle Obama both schedule plenty of leisure time in between all of their meetings and work. In fact, for the former first lady of the United States, five o-clock is strictly off-limits, as that’s when the whole family gathers together for puzzles and card games.

Not everyone manages to shut off, though. Some profess to be workaholics that struggle to refocus on anything else. This is true for Dame Helena Morrissey, the current chair at major investment firm A.J. Bell. With nine children, she often finds herself “working on the weekends while her kids do their homework” comments that she can do 12-hours days which exhaust her completely.

Arianna Huffington, the co-founder of The Huffington Post, also struggled with maintaining a healthy work-life balance which eventually impacted her health. After burning out and collapsing from sleep deprivation and exhaustion in 2007, she was forced to change her routines. She now takes sleep a lot more seriously and has found the value of “getting some serious shut eye”.

Working for yourself is challenging; it requires dedication, long days and bucket loads of discipline. Whether you’ve just started your small business, or you’re onto your third and fourth like Rihanna, the fact remains that daily habits and routines go a long way on the road to success.

Here are our three tips for creating a productive and energised daily routine:

Find a change of scenery

The office, the back of your restaurant, serving customers in your bar –wherever you spend most the time doing and thinking – when you get a chance to, leave. Even if it’s just for a quick ten-minute walk, switching up your scenery and getting some fresh air can help you with the feelings of lethargy, and you’ll no doubt come back feeling lifted and ready to get stuck in again.

Prioritising your time can be tricky, with so many things to juggle. Grace Beverley of TALA fitness uses the Eisenhower Important Principle to help her compartmentalise her tasks. It’s a method that asks you to consider which projects you have which are:

That way, you can better understand what to tick off your never-ending to-do list first. Find out more about this method and how to implement it here.

Most of the entrepreneurs we analysed tried to minimise the amount of time spent on micro-choices or things that would distract them from fulfilling their overall critical business needs.

Whether that’s by preparing meals in advance or booking meeting slots for one full day instead of having them across the whole week, any decisions you can make to prepare yourself ahead of time will undoubtedly help you get the most out of each working day.

At Dojo, we’re empowering small business owners to grow by allowing them to accept card payments with ease with our range of contactless, mobile and portable card machines. We’ll get you paid faster than any other provider, as standard with next-day transfers, starting from 10am each day.

Methodology
In order to understand how female entrepreneurs spend their time Dojo analysed biographies, interviews, social media and articles that have been published on each individual. This data was analysed and each activity was split into a category of either sleep, food/drink, exercise, meditation, leisure, work/admin or other.

The routines listed are not reflective of the exact everyday activities but a general representation of a weekday that the individual has presented to the media. The study looked at references between Jan 2018-Jul 2021.

How entrepreneurial is your city? The Dojo global ambition index

The rise of the commuter town during the COVID-19 pandemic

The best cities to start a remote business from